An article published in the catalog of the exhibition, Israel Museum “1965 today” by Aya Miron

Josef Halevi was a self-taught painter, who started his education at a Talmud Torah school and continued at the Herzliya Gymnasium in Tel Aviv. In 1965, he was one of four young artists presented by the curator Yona Fischer in Trends in Israeli Art – the Israel Museum’s inaugural Israeli art exhibitions , on view at the Binyanei Ha’uma building. That same year, Halevi represented Israel at the International Biennale of Sao Paulo (with 43 oil paintings), together with Louise Schatz (watercolors) and the sculptor Hava Mehutan. And yet, Halevi has been practically expunged from the consciousness of Israeli art since leaving Israel for Amsterdam in 1973. Prior to his emigration ,from 1956 to 1971, he had held twelve one-person shows; afterwards, it would take sixteen years before he would hold another one-person show in Israel, at the Petach Tikva Yad Labanim Museum (nowadays the Petach Tikva Museum of Art).

Halevi’s 1965 paintings are filled with ritual imagery of pilgrims carrying sacrifices, fruit and fish, winged riders and animals, and kings representing ancient Oriental myths. His painterly language was in many ways unlike any of the forms which commonly express such contents. His work was unique in combining the mysteries of myth and imagination with expressive means utterly devoid of any mysticism or surrealism. The drama in Halevi’s saturated paintings in generated by free, dynamic brushstrokes rather than by the figures’ gestures or through extreme lighting effects. The richness of his palette – achieved with self-prepared paints-endows the paintings with the vitality of abstract expressivity, which does not rely on the power of a strong story. It is quite possible that, like many other Israeli artists in the early 1960’s, it was Halevi’s 1963 visit to Paris which drew him to abstraction, such as was exhibited there at the time. “It seems that he was influenced by the paintings of Cobra (this influence was exceptional in Israeli art, and occurred much earlier than his emigration to Holland) in defining his lines as somewhat caricaturist, somewhat grotesque, abstract, drawn with a spontaneous brush, black on tones of greenish-brown”. (1).

In a review of Halevi’s 1966 exhibition at the Artist’s House in Tel Aviv, Yoav Barel writes:” One may perhaps claim, with all due caution, that Joseph Halevi’s works are among the first naturally , clearly Israeli paintings to emerge here. Painting which justifies the adjective ‘Israeli’ not through any literary attributes but through a particular sensitivity to color, form, and composition”. (2). However, Halevi’s work underwent many changes through the years. After the biennale in Brazil he spent three months in New York. “His 1965 visit to New York and the encounter with the New York school (particularly Motherwell and Rothko’s) charged Joseph Halevi’s paintings with a refined palette, while the number of images decreased and they acquired a zoomorphic presence; like blown up micro-organisms”. (3).

Over the next decades, Halevi’s paintings would grow larger, while his images became reduced to marks and letters. 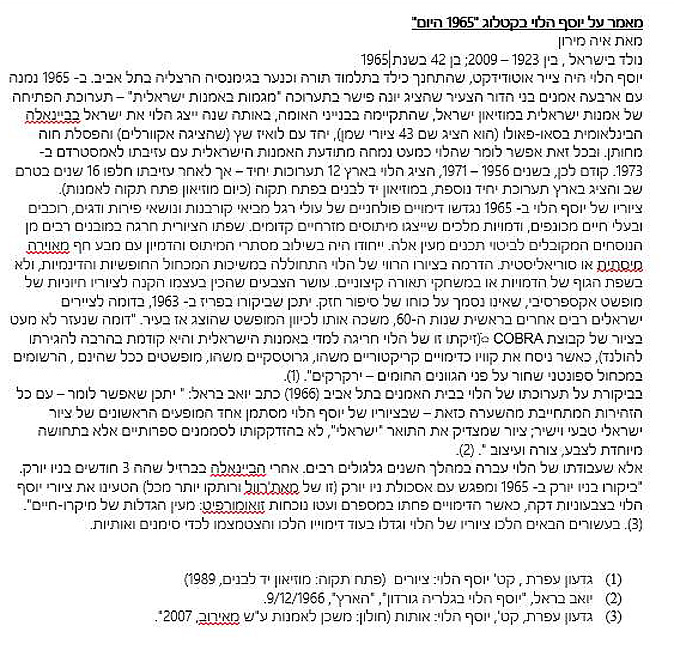