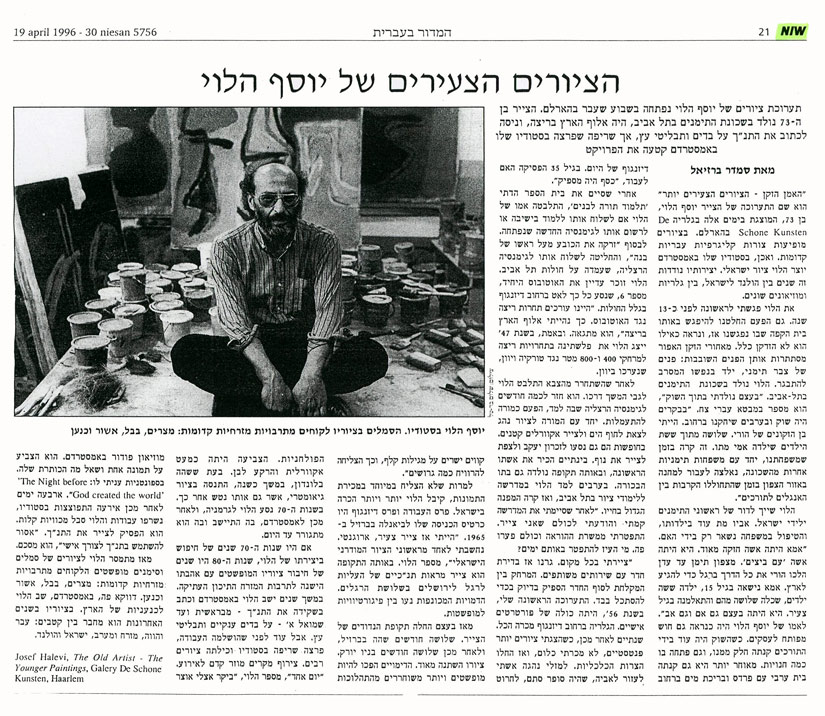 ״Old master: Younger paintings״ was the title of the article about Josef Halevi in NIW (1996)

Josef Halevi: first generation of Yemenite children in Israel, raised in the sands of Tel Aviv without a father who died at young age and with a very strong mother. Instead of going to Yeshiva Josef was sent to the first gymnasium in Tel Aviv. To get to school he used to race with the bus and had becom a national runner and even was sent to international competitions. After military service he became a sport teacher and went often to the beach with the art teacher. There he was introduced to painting and he went to the art academy. After his first daughter was born he had financial difficulties and couldnt live just from being an artist. Fortunately his father in law was a Torah calligrapher: there he learned to write the Bible as source and earned his bread writing the holy letters. After years of wandering the world and having professionally success he settled in Amsterdam. For years he sat and wrote the Bible on monumental canvases and wooden reliefs. Until one day, a fire broke out and burned allmost all paintings. Josef devoted himself from that day to Old testament symbols and signs of ancient Middle Eastern cultures.

In Amsterdam he returned to Canaan’s enlightenment and connected the poles: past and future, east and west, Israel and THe Netherlands.